It turns out that the first run of the Claybuster CB5034-28HS wads appear to be incorrectly sized. I recently bought a new batch of them which are marked with a "B" after the part number. The Rev B measures about .075" shorter and is .006" larger in diameter. This diameter change doesn't seem like a lot but it has corrected by "scorching" problem and the shorter length has fixed the crimp issue. 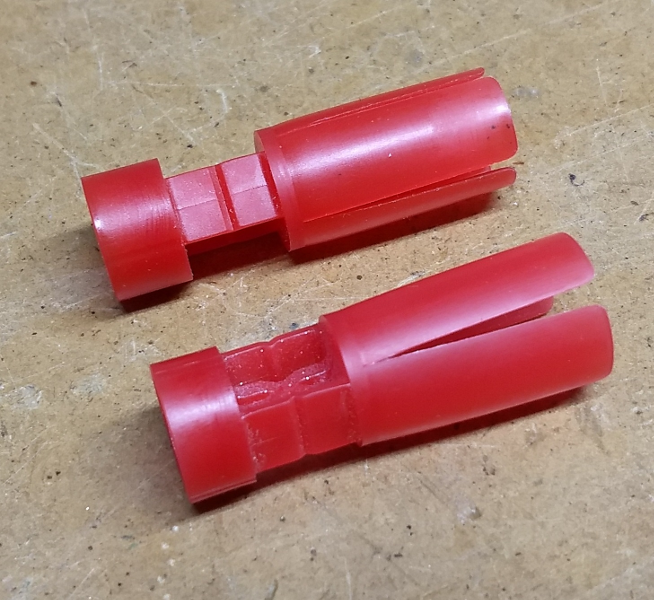 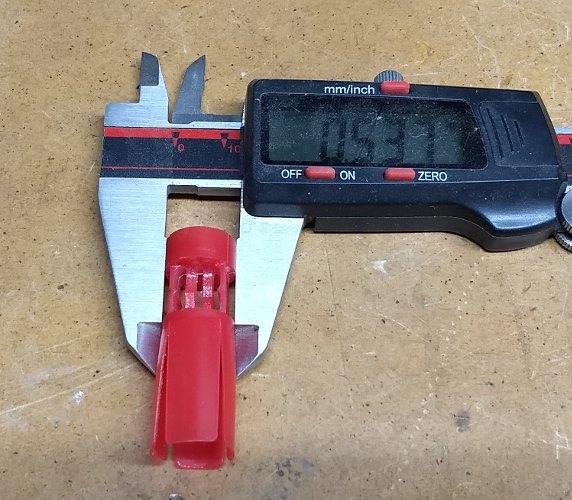 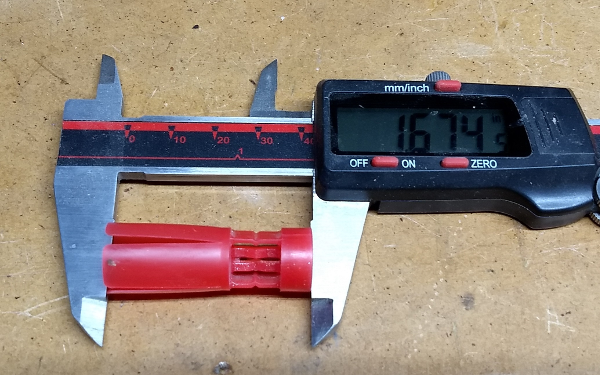 Overall Length vs Pressure in a .45 Colt 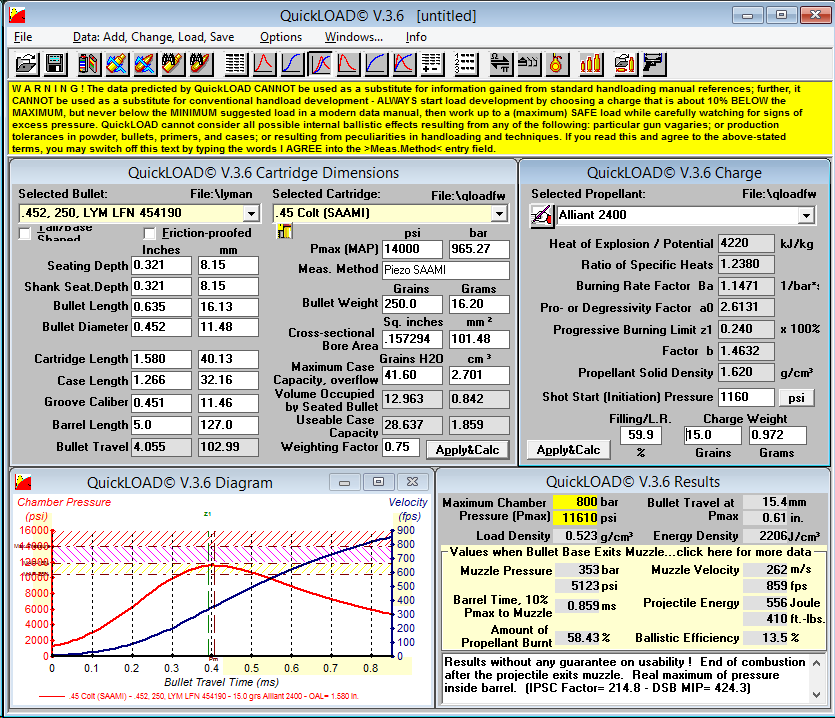 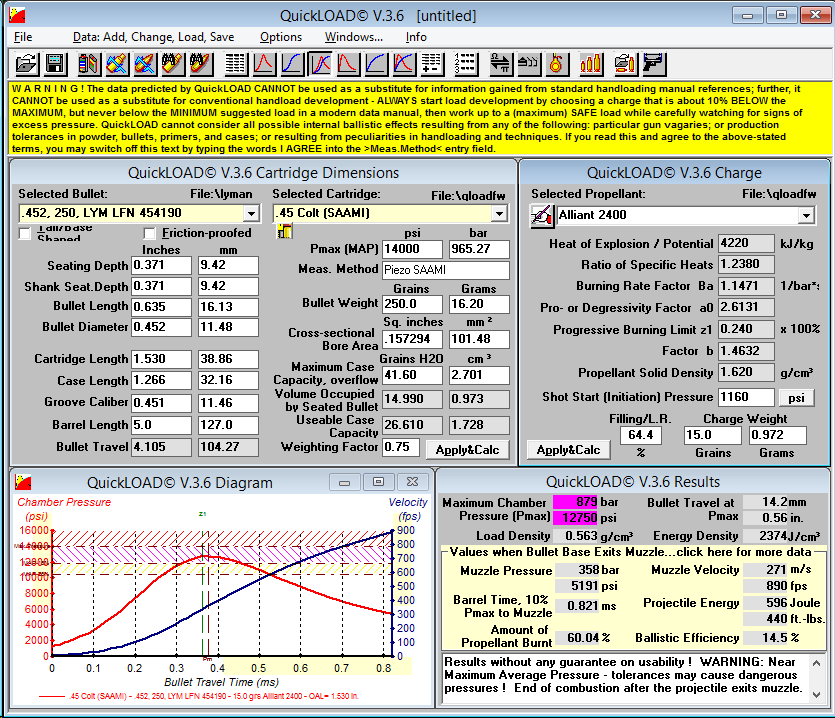 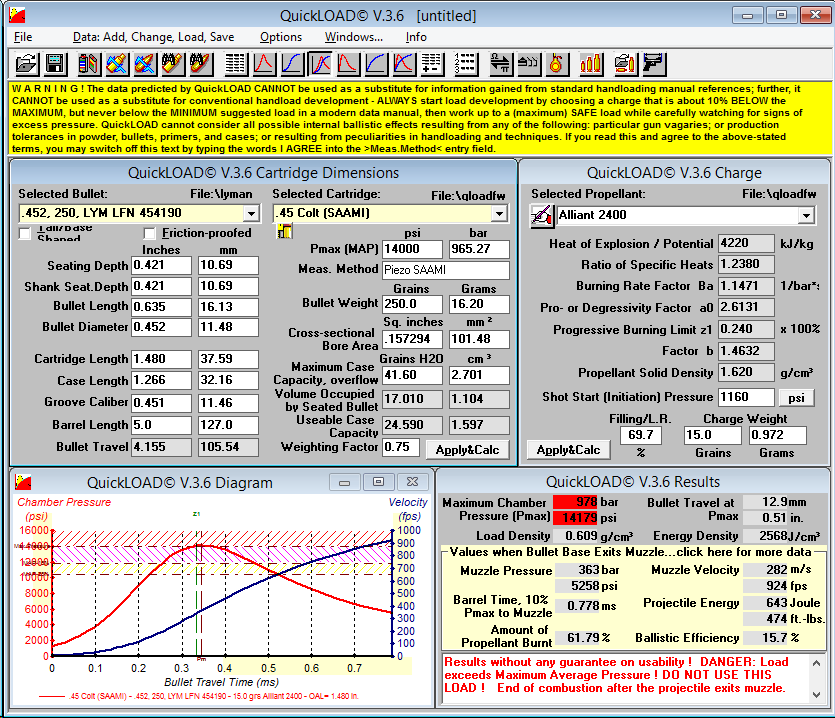 Any time I get a new load, I check it with Quickload if I have any doubts about its performance or safety. Even this isn't 100% accurate so it's best to start low and work up to the load while checking cases for signs of over-pressure and verifying velocity is as expected.

Demo of a Lyman Lubrisizer

I just cast a batch of 250 grain .45 cal bullets for loading .45 Colt and shot some video of the sizing / lubricating operation since I get questions about this from other people who reload and are thinking about getting into bullet casting. 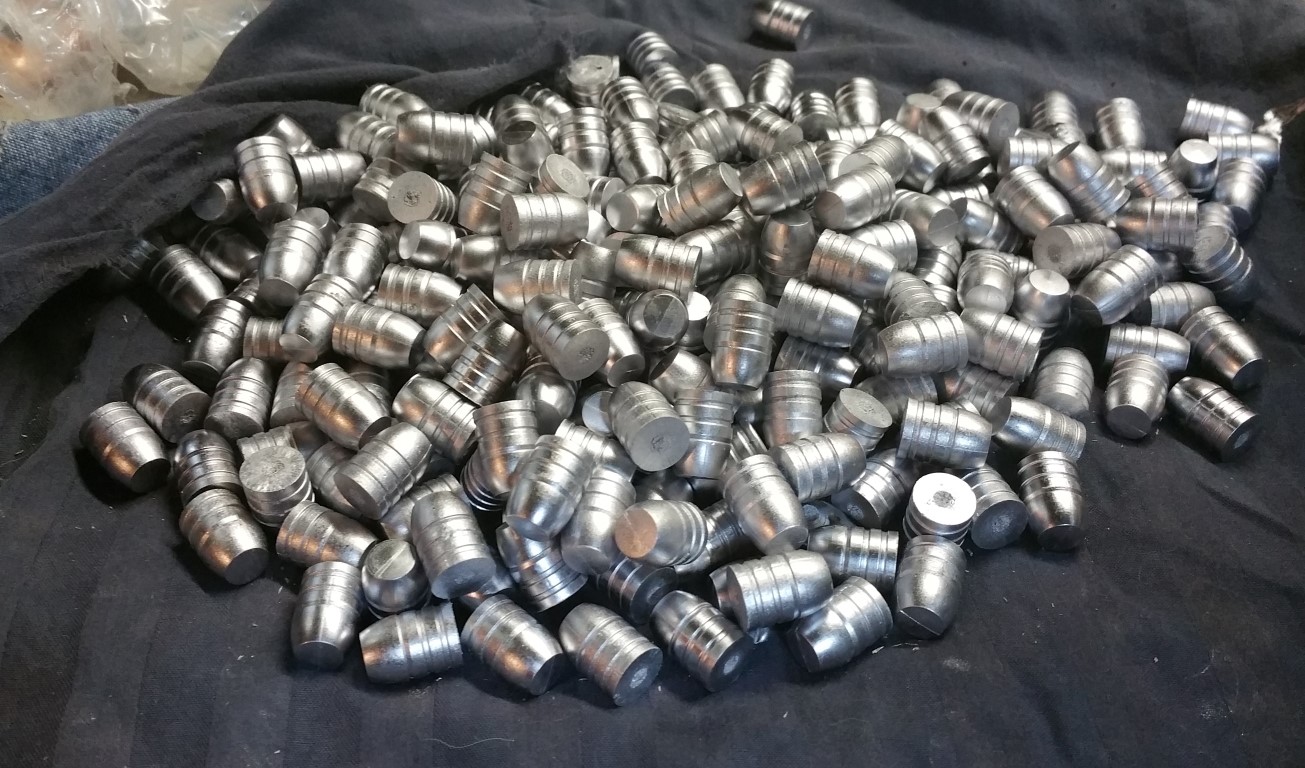 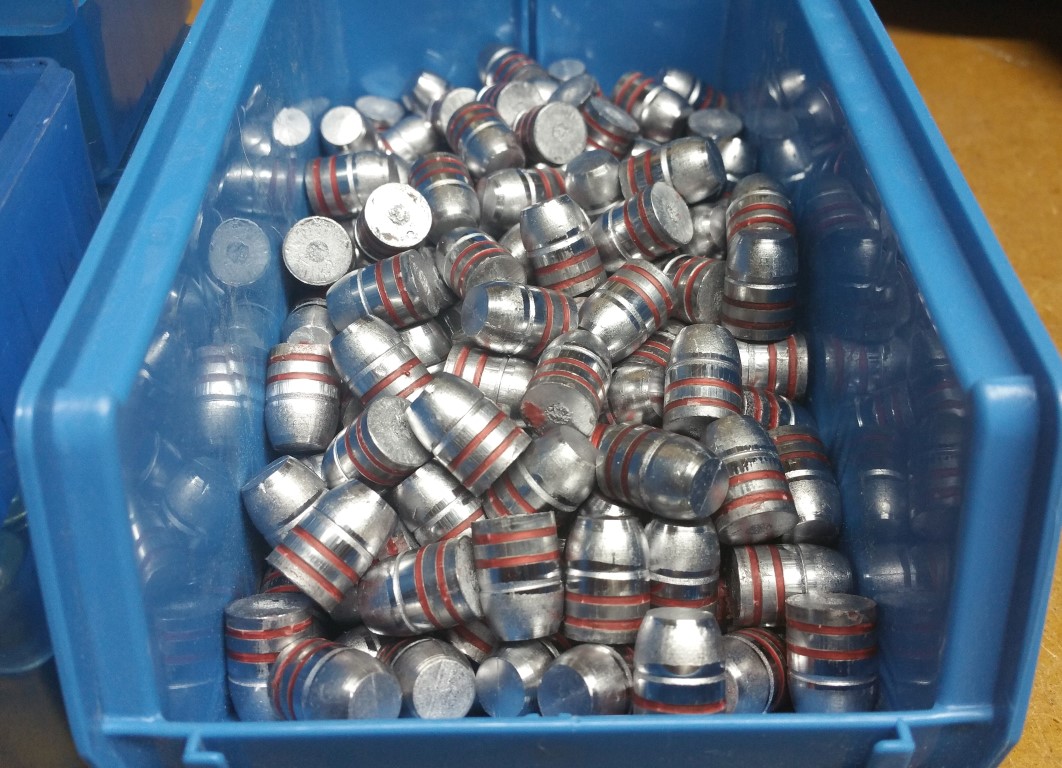 For more information, there are a lot of good articles available online at the Los Angeles Silhouette Club. If you are thinking about bullet casting or want more info about how to make your bullets better, this is a great place to look.

I have the Lyman 4500 Lube Sizer with the heater that I got from Midway USA The heater is important when using harder lubricant. I use Jake's Scarlet Cerasin Bullet Lubricant from Jakes Products for everything from 9mm to .308 and have never had an issue with it. I especially like this product because is isn't sticky or gummy when handling them after they are cool. It helps to keep from getting junk stuck to them when reloading.

Here is a video of it in action:

Installed a Peep Sight on my Henry Big Boy Rifle

I got this Henry Big Boy Rifle in .45 Colt and love it. It's really smooth and accurate but I had some trouble with the standard rear sight on it. After a bit of googling, I found that Skinner makes a "BARREL MOUNTED DOVETAIL SIGHT" that "works well on any Henry rifle with a 3/8" Dovetail" and decided to give it a shot. I was pretty sure that it would fit ok since there is a photo of it on a Henry Big Boy on their website. The installation of a Skinner Peep Sight has made a world of difference. 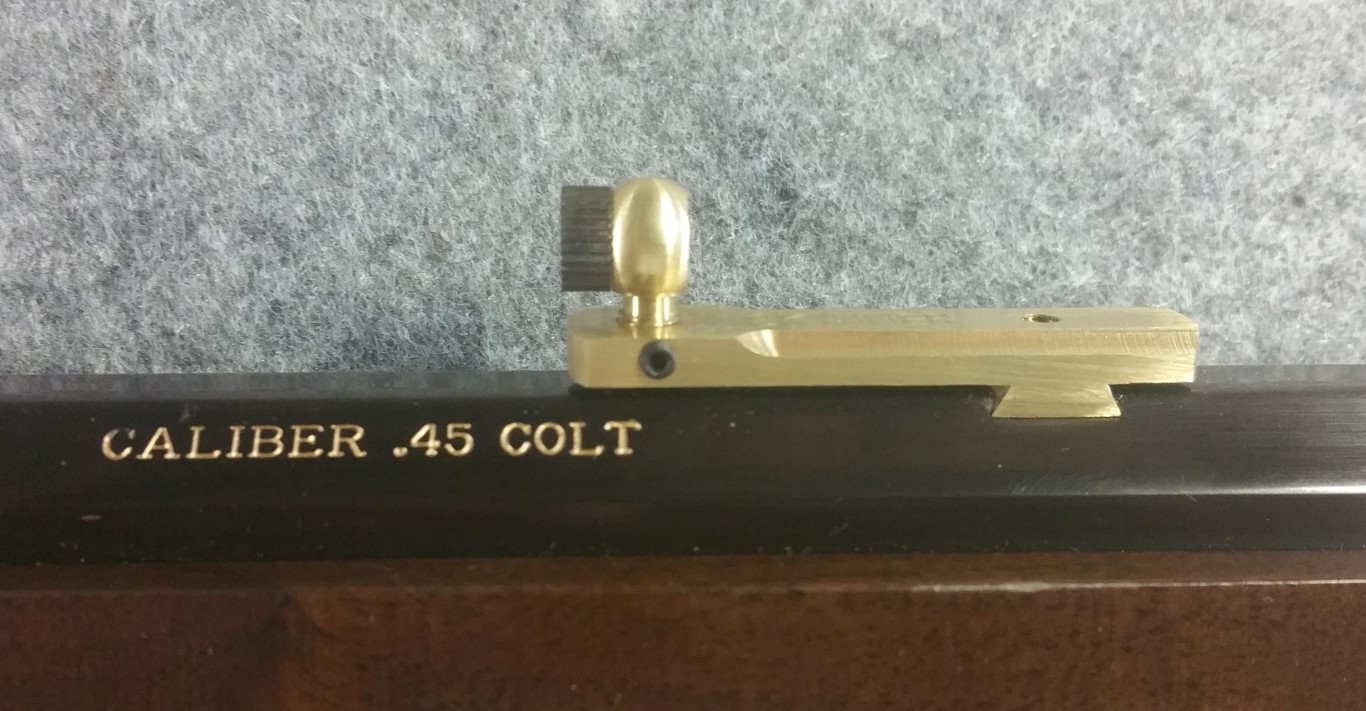 The installation took about 10 minutes total. I just loosened the screw on the original sight and tapped it out with a brass punch and hammer (Wheeler Hammer and Punch Set) then I tapped in the new Skinner sight, made sure it was centered, and tightened the set screw. It mounted very securely and the brass looks good on it. 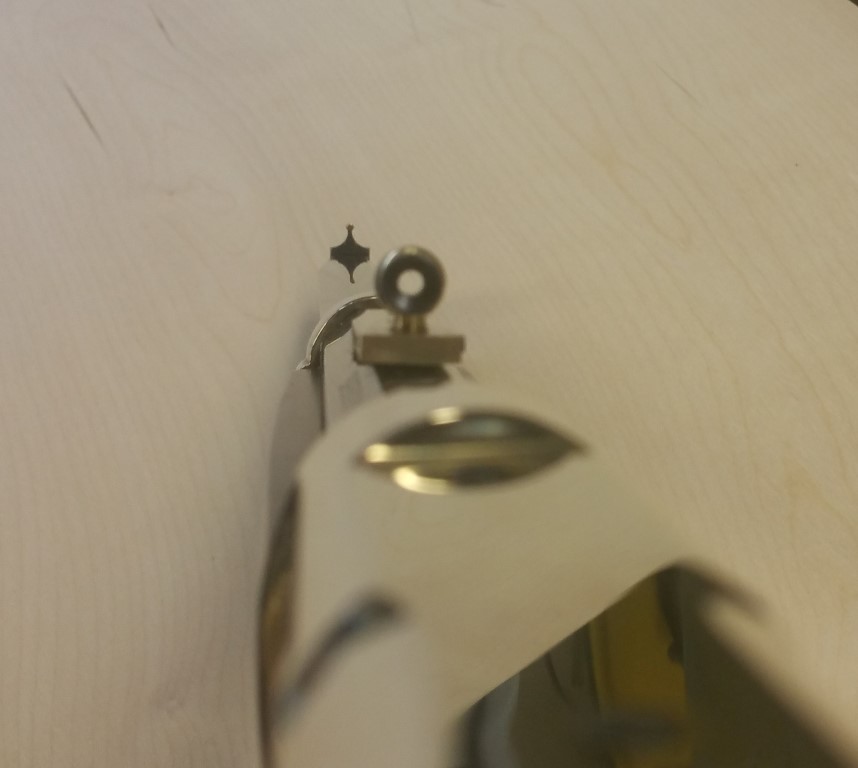 I just bought a Ruger American Rifle Compact in .308 Winchester at Freestate Gun Range last weekend with the thought of using it for deer hunting this fall in Frederick County, MD or in West Virginia (since rifles aren't allowed for deer hunting in Baltimore County). I really like the idea of a 100% Made in the USA product. Keeping with the Made in the USA, I have outfitted it with a Redfield Revolution 4-12x40mm Accu-Range rifle scope.

So far the rifle seems to have a nice fit and finish but the safety stage of the "Ruger Marksman Adustable Trigger" has a rough travel and seems to stick a bit. I'm going to give it a try in the factory configuration before taking the trigger out an polishing the parts.

This is my first Redfield scope and I'm pretty impressed with the quality and clarity of this scope.

I cast some 180 grain .308 bullets using a Lyman 311322 mold and have made some aluminum gas checks using the Freechex tool. I have loaded these into Lake City brass with a CCI Large Rifle primer and 21.0 grains of Alliant 2400 powder with 2.695" OAL. I estimate using Quickload that this will be about 1788 ft/second and have about 1300ft-lbs of energy which is a light load for a .308 Winchester but is easily sufficient for deer hunting (> 1200 ft-lbs required in MD for a rifle). 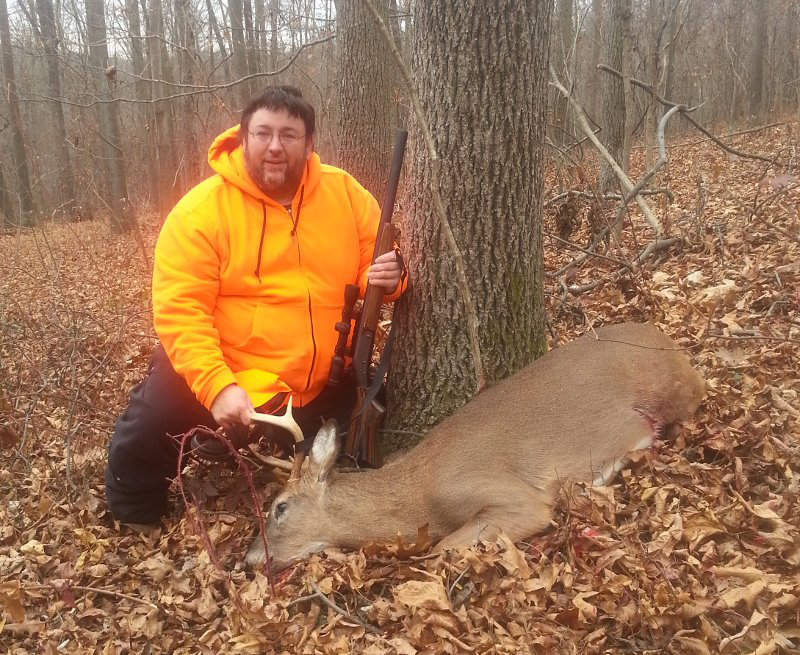 The slug hit just behind the right front leg about 2" below the spine and exited low just in front of the left rear leg (you can see the exit wound in the photo). The shot was about 60yards down a 20 degree slope. The slug obviously had enough energy but more expansion (or compensating for the slope more to hit a couple of inches lower) would have dropped the deer much faster. He ran for about 200 yards up the other side of the valley and over a ridge.

Thanks to Dave, John, and Andy for helping me with the field dressing and getting it back to the car and special thanks to Dave for inviting me along on this trip!

I purchased this shotgun about 2 weeks before the 2012 deer hunting season in Maryland. The first thing that I did to it was cut 1 1/4 inches from the stock (the length of pull was a bit long for me to be comfortable) and added a Burris Fullfield II Scope 2-7x35mm. I chose this scope because of the excellent review that it got at chuckhawks and because it has a 1in range in eye relief (3.1-4.1 inches)

Overall, I have been very happy with the performance of this shotgun and scope. This is a purpose-built slug shotgun with a heavy rifled barrel. H&R even weighted the stock to reduce felt recoil (complicated the stock shortening since I had to cut the steel weight also).

Since I have been casting my own bullets for .308 and .454 Casull, I decided that I would cast slugs also. I saw that Lee sells a 1oz slug mold for about $28 that is designed for smooth and rifled bore shotguns and uses no special wads. In fact, it advertised an "exclusive drive key which positively rotates the slug in rifled shotgun barrels.

I cast about 50 of these using my Lee Production Pot loaded with 95% lead / 5% tin. The mold seemed to work ok but is finicky to close because the inner mold part didn't seem to want to line up properly unless the mold was tilted on its side. 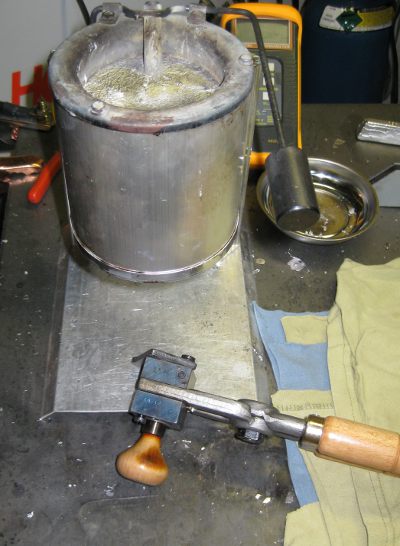 I tried to use the loading data that came with the mold but the wads and powder used in their recipes aren't easy to come by here. My first attempt used the following load:

At 25 yards, I was barely able to keep it on the paper. After reading a lot online, I thought that maybe the wads were being damaged from the heavy load and causing the accuracy problem. Also, I read that the Fiocci were straight-walled european hulls and didn't match the Claybuster wads so I started using the Winchester AA cases.  My 2nd attempt used the following load:

Alhough the accuracy was somewhat better, it was still unacceptable = 6" at 25 yards. I then tried the same load with two different Winchester wads (WAA12SL [1 oz] and WAA12L [7/8 oz]) but had similar poor results

At this point, I am about 1 week out from the start of deer season and I don't have a slug load accurate enough to hunt with. I then decided to try a more scientific approach and load up a variety of options. I bought HS-6 powder, Longshot powder, and the Lyman 525 grain slug mold which looks like the world's largest airgun pellet. 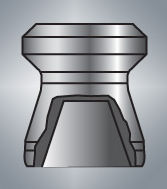 Additionally, I read on the Internet that clean slug/wad separation is important so I included some lubrication on some of the slugs. I have used the lanolin / alcohol described in my case lube article below on some of the slugs. Casting with the Lyman slug mold went much better than with the Lee mold. After each pour, I was able to twist the center post (which released it from the slug), open the mold, and use the center post to gently set the slug on the cloth. I believe that this is much gentler on the hot soft slugs that whacking on it as I had to do to get the Lee mold to release. 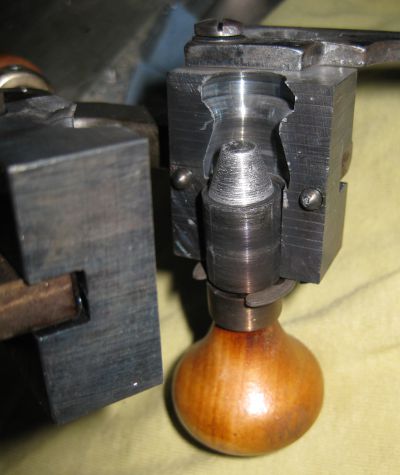 Since I was using the Claybuster's 1 1/8 oz wad, the hulls didn't like to stay crimped very well. I would like to test the 1 1/4oz wads in the future but wasn't able to obtain any locally that didn't have ribs inside of the cup that would interfere with the slugs. 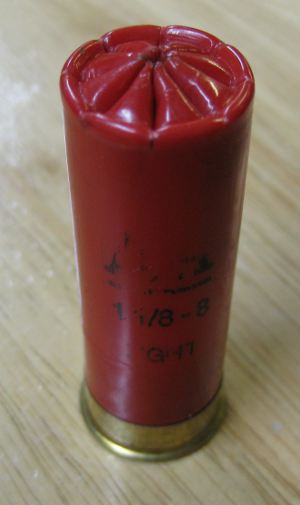 Here are the loads that I tried and the results (all are 5 shot groups -- really):

From this I have learned the following:

Depending on whether or not I can get to the range on Friday(the day before deer season starts), I plan to try the following load to get a bit more energy and a flatter trajectory (for longer shots):

Except for the wad, this is identical to the load given in the Lyman Shotshell Reloading Handbook. This should give an accurate load with more than enough energy for deer hunting. I would also like to try the 1-1/4 size wads to help the crimp on the hull stay closed better but I won't be able to source them before opening day.

UPDATE: The above load (525 Slug w/ 27.0 gr of Universal and CB1118-12 wads) did not perform well. There were fliers in nearly every group of 5 that I tried. I believe this to be a result of wad failure from the pressure of this hotter load. I have gone back to the 25.0 gr load and am still getting good accuracy as shown above.

Anyway, I have plenty of slugs cast and waiting to be loaded. 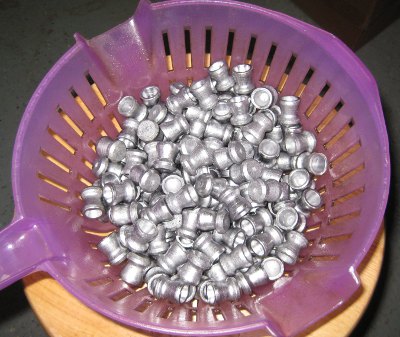 WARNING: These loads were tested by me in my gun and I believe them to be within safe limits but these are not officially tested and published loads. This data is for informational purposes only. I recommend that you don't try any of these loads without independent verification of this data. I assume no responsibility for any use of this

I have been reloading multiple calibers on my Dillon 650 press and it has been getting expensive using the Hornady One-Shot lube so I searched and found some home-made recipes for case lube. I settled on using the lanolin / alcohol mix but got some conflicting information on what mixture and alcohol strength was acceptable. I tried the following and have gotten exceptionally good results. 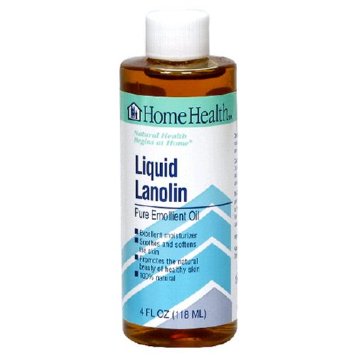 The difference between using 99% alcohol and 91% alcohol is that the mixture will separate over time with the 91% alcohol. This isn't a big deal since 5-10 seconds of shaking will remix it.

I put the brass into a clean plastic tub (the dishwashing tubs from the Dollar Store are cheap and great for this) and spray/mix until they are all coated. The alcohol coats the brass well and even seems to flow into the neck. WARNING: You should do this in a well-ventilated area away from open flame since the alcohol evaporates quickly (making flammable fumes).

This formula works extremely well for me especially in the larger rifle cases (.308 / .270 / etc.) I was using a large amount of pressure to resize with the Hornady One-Shot lube but this makes it much easier and smoother to resize the large cases. I have reloaded everything from .380 to .45-70 using this and have had great results with no issues.

Where to Shoot in Baltimore

I get asked often where I go to shoot in the Baltimore area. I have three places that I frequent: